This software consists of Max patchers that process the FFT of a recorded sound. Available to download free from the software page. 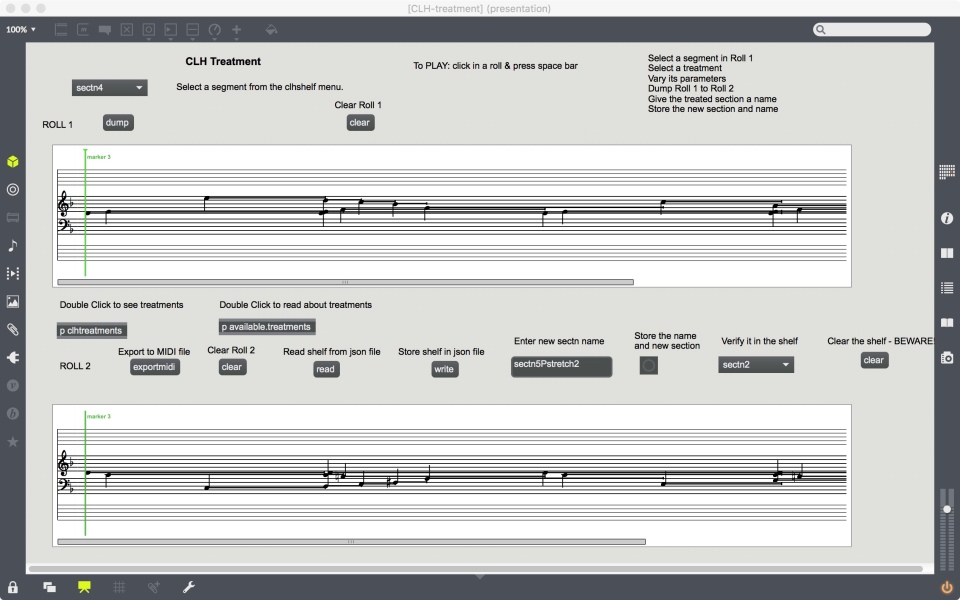 The Composer’s Little Helper (CLH) is a Max patcher that makes use of the “Bach” and “Cage” libraries to manipulate and mix musical notation that has been saved in a “shelf” as separate segments. CLH implements musical operations such as transposition, inversion, retrograde, plus a number of other “treatments” that use the high-level “Cage” library for real-time computer- aided composition.

This version is the version that was show-cased at the Australasian Computer Music Conference 2018 in Perth. The Max code is available from the software page.

NOTE: Read the file “000-NES-Spectrale-Readme.pdf” first to understand what the patches do, and how to run and control them. 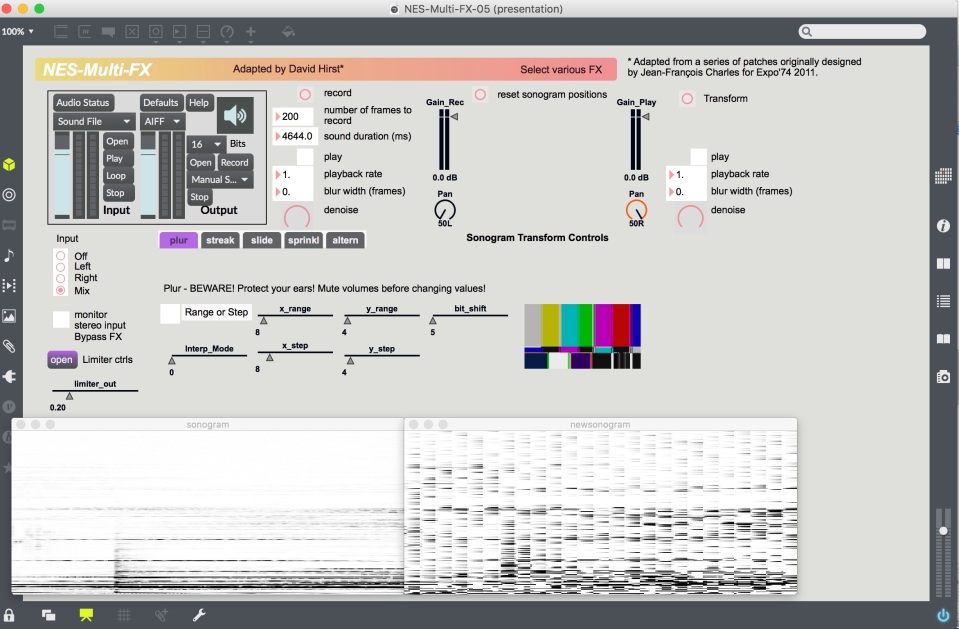 1. Turn on DAC 2. Open a sound file and play it 3. Select an effect using its radio button 4. Double click on the corresponding effect object to open its window and control its parameters 5. Adjust overall levels 6. Try another effect 7. Use one or more effects in your own patcher

Here is what “02-NES-Plugin-Examples.maxpat” looks like when you open it (below). Note the FX processes are each their own object in Max.
Hope this is helpful.

Like Loading...
NES-Tools-Beta-01 has been created for people who want to:
NES-Tools is available from:
The Software page.
It has been tested using Max 7 on Mac with MacOS Sierra 10.12.5 only.
Read the Readme file first. 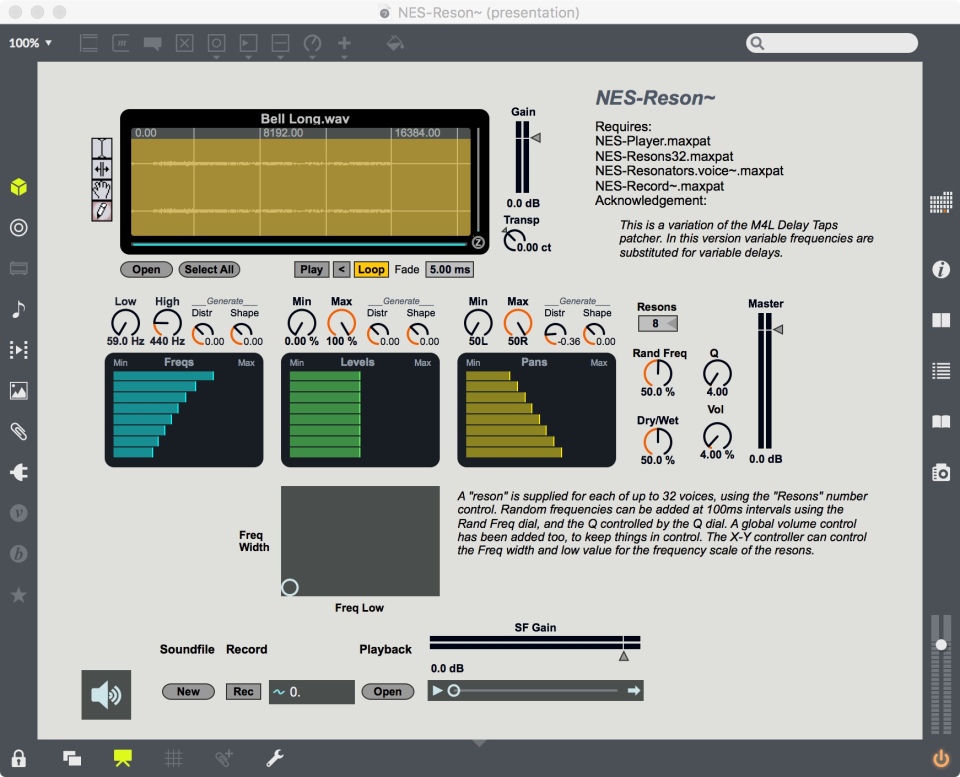 Inspired by the GRM Tools suite of audio processors, I set out to create a set of processing tools using cycling 74’s Max environment. The idea was to just use only the standard objects that come with Max 7. As it turned out, many of the tools I wanted to create had already been implemented in one form or another in the standard distribution files and examples. What I have done is to adapt and add to the examples created by others, and assemble these tools into their own suite. That suite is as follows:
NES-Biquad~ Implements a two-pole two-zero filter (for 2 channels)
NES-Brassage~ Granulate a recorded sound
NES-CombFilter5~ Implements 5 Comb filters
NES-DelayTaps~ Up to 32 delay taps
NES-DopplerPan Simulate a Doppler effect
NES-PitchMulti~ Pitch shifter with vibrato & feedback
NES-Reson~ Up to 32 simultaneous resonators
Any feedback on usefulness, errors, or attribution is welcome.
Most of the patchers can have the processing part extracted and be linked in a sequence to process live sound too (except for Brassage~)
Enjoy and modify at will (just acknowledge the sources).

From January 2016, my position as Honorary Associate Professor and Principal Fellow in Music has been moved to the Melbourne Conservatorium of Music at the Faculty of VCA and MCM, the University of Melbourne. See:

“Imaginacão de Viseu” (Imaginations of Viseu) * (2016) – an electroacoustic music work selected by an international panel for inclusion in VISEU RURAL 2.0 // SONIC EXPLORATIONS OF A RURAL ARCHIVE: This international competition invited electroacoustic musicians/composers and sound artists from around the world to produce sound works based on the Viseu Rural 2.0 archive, one that is being collected and archived by Binaural/Nodar with recordings of rural contexts from the Municipality of Viseu (Viseu Dão Lafões, Portugal).